New Youth MPs for Blackburn and Darwen have been elected 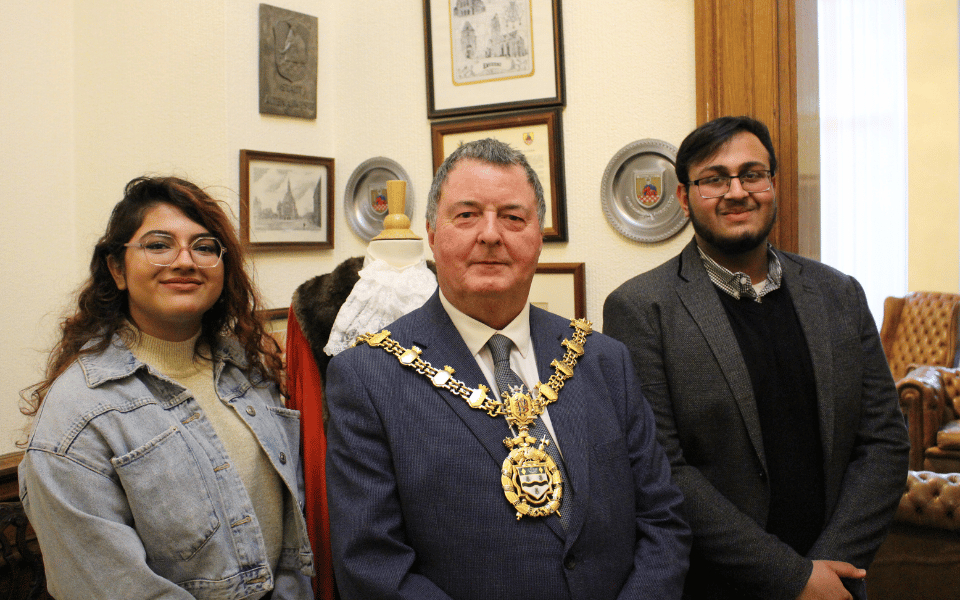 6,000 young people across Blackburn with Darwen voted in the 2022 Youth Forum elections to select three Youth MPs to represent their views during 2022-2024.

The election took place on Monday 14th February 2022, and Leader of the Council Cllr Mohammed Khan CBE and Blackburn with Darwen Mayor Cllr Derek Hardman were of those in attendance.

Having previously served as Deputy of the Forum, Muhammed’s winning campaign pledged to support young people’s mental health and food poverty within the borough.

It is an honour to have been re-elected as Blackburn with Darwen’s Youth MP and I hope to continue to build on the momentum of the past two years.

I will strive to continue to deliver for the borough’s young people with passion, dedication, and humility as they have put their trust in my leadership, not only locally but nationally.

Deputy Isabelle Crawford was thrilled to have been elected and said:

Hasti and Mohammad are excellent to work with and are so passionate about their campaign issues. My goals are to provide better representation for the youth in Blackburn in Darwen with a focus on environmental issues and tackling discrimination.

I am very honoured to have been elected as Deputy Youth MP for Blackburn with Darwen and given the opportunity to make a difference and be the voice of the young people of this area. My main focus in the next year will be on campaigning for equality and the fight against sexual harassment and bullying in our Borough, alongside doing my best to make transport and leisure as safe and as easy to access as possible.

I am very excited to work alongside the wonderful Isabelle and Muhammad, my felow MPs, as well as alongside the BwD Youth Forum to represent the youth of this area in the next 2 years.

The work done by youth organisations in Blackburn is very inspiring and I am very excited to partake in projects such as the Young Inspectors, PRIDE, Well-being Champions and many more that are in the process of coming to reality. This is truly an exciting time for me, and I am sure it is for my fellow MPs as well.

Blackburn’s Youth Elections have been running since 2001 and play a significant role in helping the council to shape tailored services for children and young people within the borough.

Having seen Muhammed‘s dedication and hard work over the last two years as Deputy, I could not be happier for him that he has been elected as Blackburn with Darwen’s Youth MP. I am confident that with the support of Hasti and Isabelle, he will continue to make excellent progress and assist the council in addressing prevalent issues that are important to our young people.

PrevPrevious£150 support for rising energy bills in the borough
NextWhat would you like to see as a local COVID memorial?Next
Related Posts